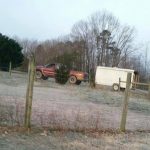 (from Bedford County Sherriff Office) On Saturday, December 18th, 2020, Bedford County Sheriff’s Office received information that a subject described as a very short (had a hard time seeing over the steering wheel), white male, approximately 20 years old, and a mustache, attempted to steal a Kawasaki ATV from a residence on Crab Orchard Road. The owner was able to catch the subject in the act and the subject fled, leaving the ATV behind. The vehicle appears to be an extended cab Ford F-150 with a small white enclosed trailer (see photo).

Anyone with information that can identify the suspect to submit a tip to Central Virginia Crime Stoppers via phone at 1-888-798-5900, online at http://p3tips.com or the PSTIPS3 app on your mobile device. Those who submit tips via Crime Stoppers remain anonymous and could receive cash reward of up to $1,000.00.