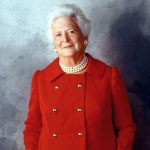 (ABC News) Barbara Bush was remembered at her funeral as a loving wife, mother and friend with a devilish sense of humor and who represented the best of the World War II generation.  “Barbara Bush was the first lady of ‘the greatest generation,'” presidential historian Jon Meacham, a friend of the Bush family, said in a eulogy at Saturday’s funeral service in Texas that drew signatories from across the nation and around the world.

Meacham recalled the snowy-haired former first lady’s “long and consequential life,” not least her promotion of literacy, her quick-witted humor and her trademark faux pearls. “She was candid and comforting,” Meacham said, describing her as a “point of light” who “kept everything and everyone together.”

Some 1,500 guests filled St. Martin’s Episcopal Church in Houston for the service. Barbara Bush, who died on Tuesday at the age of 92, had requested in her last wishes a modest funeral at the Gothic-style cathedral, where she and her husband, former President George H.W. Bush, were devoted members for decades.