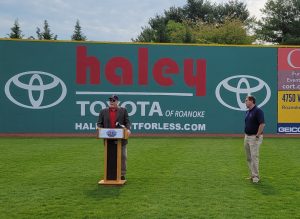 Haley Toyota has extended its field naming rights with the Salem Red Sox. The Sox return to action on Haley Toyota Field on May 11th, and when that occurs, it will have been 614 days since they last took to the diamond. Haley General Manager Chuck Baker says it’s more than just baseball:

Under a minor league reorganization, The Red Sox will now play in the Low-A East League. In consists of 12 teams in three divisions and is four minor league levels below the major leagues.