Another loaded gun snagged at ROA 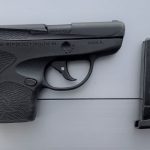 A man from Roanoke was cited by police after Transportation Security Administration (TSA) officers prevented him from carrying a loaded handgun onto his flight on Wednesday, April 27, at Roanoke-Blacksburg Regional Airport.

The .380 caliber handgun was loaded with five bullets. A TSA officer who was staffing the checkpoint X-ray monitor spotted the weapon and ammunition as they entered the checkpoint X-ray machine. TSA alerted the police who confiscated the handgun and cited the man on weapons charges. He also faces a federal financial civil citation.