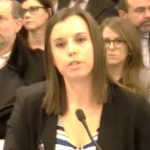 A bill is half-way through the General Assembly bill this week to prohibit reduced charges — and any chance of a reduced sentence — for anyone accused of capital murder of a law enforcement officer. The charge carries a mandatory sentence of life in prison or the death penalty. This follows emotional testimony before a committee that first considered the measure, as WFIR’s Evan Jones reports: