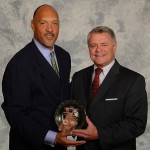 The City of Roanoke has been recognized with the Outstanding Achievement Award in the 2014 City Livability Awards Program at the U.S. Conference of Mayors’ 82nd Annual Meeting in Dallas, Tex. Roanoke received the award for its 2013 Parks and Arts Program. Award-winning cities were determined by an independent panel of judges, selected by the U.S. Conference of Mayors. Winners were chosen from a pool of more than 200 applicants. Roanoke Mayor David Bowers (at right in picture) accepted the award over the weekend.  He also spoke with WFIR’s Gene Marrano: