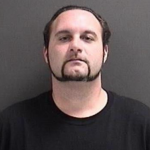 Vinton Police are asking for help to locate a man last seen eight days ago. Police say 34-year-old Dwayne Rhoades has indicated to others he may be in a state of emotional distress, and he is considered to be an endangered person.

From Vinton Police: The Vinton Police Department is seeking information regarding the whereabouts of Mr. Dwayne Rhoades, last seen in Vinton on September 12, 2018.  He is considered as a missing and endangered person. He is 34 years old. His disappearance was reported to our agency on September 17, 2018, when acquaintances received correspondence via the United States Postal Service indicating he may be in a state of emotional distress. We have investigated several leads in this matter; however, no new information has developed. There are no vehicle descriptions associated to him. If you have any information regarding his whereabouts or well-being, please contact the Vinton Police Department at (540) 983-0617 or (540) 562-3265.