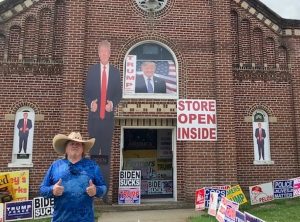 The long-time owner of Franklin County Speedway has a newer business venture going that shows no apparent sign of slowing down, even it is devoted entirely to a former president no longer in office. Whitey Taylor opened the Trump Store last September, and even though President Biden was inaugurated almost six full months ago, this store remains quite visible at a former Boones Mill church just off US 220.  And Taylor says the community should be renamed “Trumptown”, as WFIR’s Evan Jones reports: