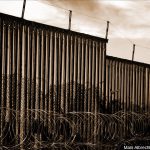 Trump also toured a two-mile border stretch of 30-foot fencing in the area, which has recently been rebuilt. Trump has used that barrier to declare that his central campaign promise of a wall on the southern border is being fulfilled despite significant opposition in Congress.“It looks great, it’s better and much more effective than previous wall, and we can actually do it faster and it’s less expensive, if you can believe it,” he told reporters in front of the barrier.

The White House says the barrier is marked with a plaque bearing Trump’s name and those of top Homeland Security officials. During the roundtable, officials also handed the commander in chief a plaque that contained a piece of the rebuilt barrier. Trump declared a national emergency on the border in February after Congress agreed to only a fraction of the $5.6 billion he had requested for the wall. That declaration, which was opposed by Democrats and some Republicans, gives the administration access to more than $3 billion in funding that can be used on the wall.