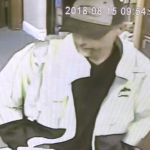 Roanoke County Police are looking for the man who walked into the King Tobacco Store on Williamson Road last night, showed a firearm and demanded money. Police say he took off in a dark-colored vehicle. No word on how much was taken.

News release: On Wednesday night at approximately 9:50, officers responded to King Tobacco Store on Williamson Road in reference to a robbery. Information was received that a white male entered the store wearing a reflective construction‐style jacket, blue jeans, black shirt, and a ball cap with a Chevrolet logo. The suspect displayed a firearm and demanded money from the clerk. The suspect fled the scene in a dark colored vehicle with an undisclosed amount of U.S. currency.